The seventh album from The National. ‘Sleep Well Beast’ was produced by member Aaron Dessner with co-production by Bryce Dessner and Matt Berninger. The album was mixed by PeterKatis and recorded at Aaron Dessner’s Hudson Valley, New York studio, Long Pond, with additional sessions having taken place in Berlin, Paris and Los Angeles.

Neil Young will open his archive and release Hitchhiker, an unreleased new studio album. The release date is 8th September 2017 on Reprise Records – it will be available on vinyl, CD and digitally. The 10-track acoustic solo album was recorded in Malibu, CA at Indigo Studio in 1976. The original session was produced by Young’s long-time studio collaborator David Briggs.

Recorded between Zuma and American Stars and Bars as a solo album in a single session, the resultant performances are truly breathtaking and passionate. The simplicity of a single voice and guitar captured here is as pure and powerful as it gets, with only Young, Briggs and actor Dean Stockwell in the room at the time of recording. A few of the songs would not appear on vinyl until years later. Some have never been heard, included in the original sessions for Neil Young and Crazy Horse’s Dume, another unreleased record of original sessions that yielded the classic album, Zuma. When the Hitchhiker album was recorded, none of the included songs had ever been released and many of the performances of the songs were the first ever. This is truly an album of original performances.

By the 1970s Studio One and Clement ‘Sir Coxsone’ Dodd had already proved himself to be the defining force in Reggae for almost two decades. From running the Downbeat sound system on the lawns and yards of Kingston in the late 1950s to opening Studio One at 13 Brentford Road at the start of the 1960s, ushering in ska and rocksteady and establishing the careers of most of Jamaica’s artists – everyone from Bob Marley and The Wailers, Ken Boothe, Toots and The Maytals, The Skatalites, Jackie Mittoo and more – Clement Dodd had until this point dominated the Jamaican musical world.

And yet, incredibly, Clement Dodd was barely halfway through his musical path, maintaining Studio One’s number one position in the Jamaican music scene throughout the 1970s with a combination of musical and creative innovation and an endless capacity to adapt and create new musical fashions. By the end of the 1970s dancehall had become the defining sound on the island. Dancehall was essentially a tribute by other Jamaican producers and artists to the classic music of Studio One created in the 1960s as young artists across the island created new songs, while musicians recreated these original classic foundation Studio One rhythms. As on other occasions, Clement Dodd rose to this new musical challenge by producing a whole new era of classics for Studio One.

A major new self-contained work by the celestial music practitioner. An experiment with gong microtonalties processed through various electronic effects. The results are unlike any music he has made before – two sidelong longform pieces that evoke the sound of a shimmering metallic eternal wave. · This clear vinyl LP raises the curtain for the more extensive forthcoming double album ‘Bring On The Sun’.

‘Love What Survives’ is the third studio album from Mount Kimbie. It is a melodic yet robust electronic record for driving with the windows down – a distillation of their career to date, mixing multiple singing voices and musical personalities, flirting with freeform experimentation, pop tropes and an expansive sonic palette. Features guest vocals from James Blake, King Krule and Micachu.

Out Of All This Blue is The Waterboys most exploratory recording yet, comprising 23 songs with Mike Scott’s trademark sharp lyrics set to pop music with echoes of classic R&B, country, soul and funk and underpinned by modern hiphop production values and rhythms.

Cacophonic Records present a record that will not only leave rare record collectors salivating but will open ambitious ears to a truly pioneering album from the seldom celebrated and individualistic micro-genre that is French free jazz. Comprising some of the earliest uninhibited performances from key musicians behind records by Serge Gainsbourg, Jef Gilson, Triangle, Don Cherry, Barbara and countless other groundbreaking European jazz records and freakish films, this album captures the birth of an exciting movement that would soon earn its Parisian birthplace as the go-to European spiritual home of improvised and avant-garde music.

The Dream Syndicate are at the foundation of contemporary alternative music because back in 1981 at a time when most bands were experimenting with new technology, they choose to bring back the guitar. Their seminal album The Days of Wine and Roses (1984) has been cited as influential by artists from Nirvana to The Black Crowes.

Vinyl release of Paramore’s latest album ‘After Laughter’ released back in May – Gatefold Sleeve.

The hallowed third album from Florida’s death metal titans… Morbid Angel. Widely renowned as the kings of the Death Metal genre with their revolutionary and unapologetic sound, Morbid Angel are one of Death Metal’s biggest and most influential bands. This record was produced by legendary Metallica producer Flemming Rasmussen. These vinyl albums have been specially recreated using ‘FDR’ – full dynamic range mastering – pressed from the original master tapes, allowing the music’s nuance to shine through and giving these classic albums a more ferocious and dynamic sound, enabling the listener to immerse themselves in the full audio heaviness

Check here  https://www.spindizzyrecords.com/shop/  for all this weeks new arrivals. 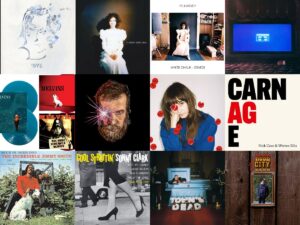