James Holden returns to the fray with his newly-expanded band The Animal Spirits. The follow up to his sublime last offereing ‘The Inheritors’, Animal Spirits will transport you to a magical other world with this third album: a bold new set of “modular synth-led folk-trance standards”, fusing elements of psychedelia, Krautrock, world and spiritual jazz with Holden’s usual propulsive melodic vigour into his most ambitious – but also most accessible – work to date. Gatefold heavyweight double vinyl includes digital download code.

‘The Taste Of TG’ comes on limited edition double red vinyl and includes a download code.

While the righteousness of blackness is at the heart of the Rastafarian faith, this collection illustrates how black pride remained a central theme, if not the defining essence, at the very core of all the music created at Studio One Records under the direction of Clement ‘Sir Coxsone’ Dodd.  In order to understand the centrality of black identity in the music created at Studio One, we need look no further than ‘Sir Coxsone’ who created and operated  the first black-owned record company in Jamaica.

Glasgow band Golden teacher return with ‘No Luscious Life’ recorded at the infamous Green door Studio in their home town.

As ‘No Luscious Life’ is the band’s longest offering of new tracks to date, it’s about time: a pop funk essay against wage labour and its lassitudes; a drum-driven homage to Senegal’s legendary poet Aby Ngana Diop; a propulsive ballad about two star-crossed lovers stuck downtown in the middle of an interstellar journey; a sweet and low last dance upon the stage of Liverpool’s late, great Kazimier club; a disorienting dive backwards into early terror of the animate shadows of childhood; a harvest song sung by machines in the autumn sun of a fully automated society; and the impressionist clamour of the eponymous grand finale’s tentative chamber music.

1992’s ‘Congregation’, The Afghan Whigs’ third album, finds the Whigs’ soul and psychedelic influences shining through and helped define the band’s sound for years to come. ‘Congregation’ has been out of print on vinyl since its original pressing sold out many years ago – now re-cut onto double vinyl. Includes Dowload Code.

‘Up In It’ is The Afghan Whigs’ second full length and their Sub Pop debut. The 1990 album, recorded by legendary producer Jack Endino, was critically acclaimed and garnered strong college radio airplay. It has been out of print on vinyl for over 25 years.  Includes Dowload Code.

‘Uptown Avondale’, released shortly after ‘Congregation’, features The Afghan Whigs paying tribute to their soul music influences by performing covers of Stax and Motown classics. This LP pressing is the first time ‘Uptown Avondale’ has been fully released on vinyl (its only previous vinyl pressing was a short European run in 1992).  Includes Dowload Code.

A FIRE IN THE SKY comes in a 3xLP set and includes a selection of songs chosen from the 19 studio albums that Deep Purple recorded between 1968 and 2013.

The 3LP set includes 27 songs, among the highlights are the single edit version of “Woman From Tokyo,” the U.S. single edit for “Burn,” and the radio edit of “Bad Attitude.”

Among the set’s many highlights are: the title track from 2005’s Rapture of the Deep; “King of Dreams” from 1990’s Slaves and Masters; “Bad Attitude” from 1987’s The House of Blue Light; “You Keep Me Moving” from 1975’s Come Taste The Band; and “Hush” from the group’s 1968 debut, Shades Of Deep Purple. This expanded version also features Kevin Shirley’s 2010 remix of “Dealer,” and the 2012 stereo mix for an early version of “The Bird Has Flown.”

This year sees ABBA’s The Album turn 40years old, and in celebration of the album’s original release four decades ago, Universal are releasing a limited edition 7” box set featuring the three singles from the album on coloured vinyl, featuring the UK number one ‘The Name Of The Game’, the international Top 3 smash ‘Take A Chance On Me’ and the European Top 10 hit ‘Eagle’. The boxset includes a download code.

Three years after Chaos A.D., the band returned with Roots, an album that was deeply influenced by Brazilian rhythms, which were incorporated into tracks like “Itsári” and “Ratamahatta.” Since its release in 1996, the album has sold more than two million copies worldwide.

‘For The Demented’ will be released via Neverland Music/Silver Lining Music – 180g coloured vinyl in gatefold sleeve and digital download. 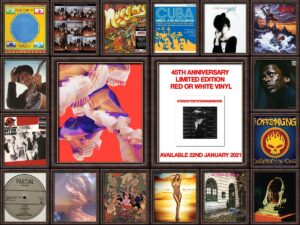