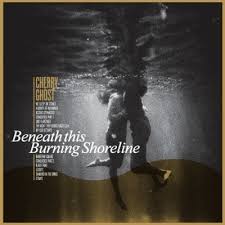 This is the first time the record is released on vinyl. Beneath This Burning Shorelines, released in 2010, was the second album from Cherry Ghost – the project of Ivor Novello winning songwriter Simon Aldred. Released on vinyl for the first time, ten years after its release, it stands as Aldred’s bona fide masterpiece – not least by the songwriter himself.

Following the chart success of Cherry Ghost’s debut Thirst For Romance, Aldred felt disillusioned with touring an album he viewed to be stylistically “schizophrenic.” Whilst proud of the songs on that record, he had visions of something more cohesive, more mood-based – where ideas re-occur, images are fragmented and songs bleed into one another. Similarly, he’d been returning heavily to artists like Sparklehorse and Wilco. After nearly a decade on the dole, once Cherry Ghost brought Aldred financial stability the first thing he did was travel Europe – the album is galvanised by these solo rail journeys through cities like Berlin and Rome. Like Scott Walker’s late 60s work, it’s a romantic vision of a Europe filtered through the lens of an outsider. Atmospherics, too, would be crucial – Aldred had been listening to film soundtracks, and songs here are linked by unmoored instrumental passages.

Beneath This Burning Shoreline is overwhelmingly in a minor key, and choruses are few – Kissing Strangers, however, is the album’s only anthemic moment.”That references my days a young gay man” says Aldred, “staggering between bars but yearning for something more.”

The album’s most powerful moment is the haunting My God Betrays – “it is” he explains, “a completely bleak portrait.” Inspired by the writings of Albert Camus, the song is an anti-hymn to a malevolent God, a prayer to a Lord who plays to the crowds and turns on the weak. People Help the People It is Not. There is, however, some redemption – the chiming Black Fang is one of the most successfully realised love songs in Aldred’s back catalogue. A decade on, it remains Aldred’s proudest work – “It’s the one I always go back to, to remind myself what I get out of music.”