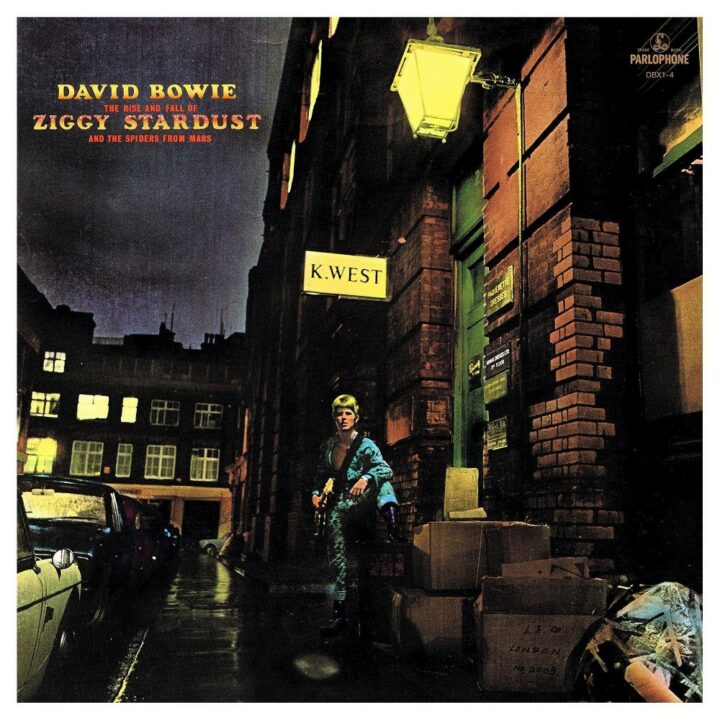 180 Gram Vinyl. Originally released through RCA Victor on 6th june 1972, ‘Ziggy Stardust’ was David Bowie’s fifth album, co-produced by Bowie and Ken Scott. Incredibly, the album was written whilst Bowie was recording 1971’s ‘Hunky Dory’ album, with recording beginning a couple of months before that album’s release. It was recorded at Trident studios, London between 8th november 1971 and 4th February 1972, with the line up: Mick Ronson (guitar, piano, backing vocals, string arrangements), Trevor Bolder (bass), Mick Woodmansey (drums), Rick Wakeman (keyboards) and backing vocals on ‘It Ain’t Easy’ by Dana Gillespie. as well as performing vocals, Bowie also played acoustic guitar, saxophone and harpsichord on the album and was involved in the arrangements too. The album eventually peaked at number 5 on the uk album chart on 22nd july having entered the chart at number 15 on 1st July. Key to the album’s rise in the uk were the two tv performances of ‘Starman’ on granada tv’s lift off with ayshea and nationally on the bbc’s Top of the Pops. the album’s influence is immeasurable – it converted legions of fans, becoming the zeitgeist and a major influence on the next generation, particular those who were involved in the punk movement – musicians, artists, designers – and the subsequent re-birth of rock and pop. Famously Bowie killed Ziggy at his peak at London’s Hammersmith Odeon, on July 3rd, 1973, though Ziggy Stardust’s influence was to redefine popular culture forever: pop music was never the same again.