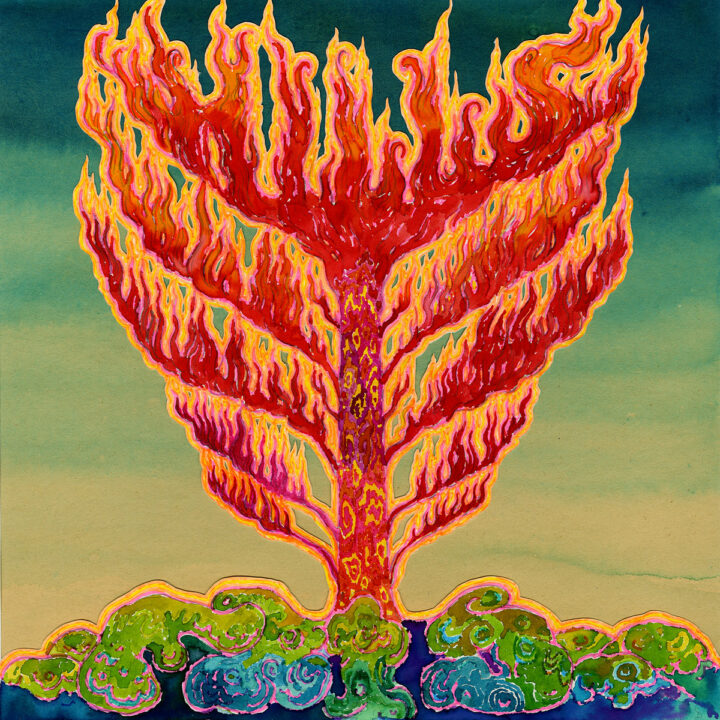 As has often been noted, psychedelic music can involve causal links between getting out of it and getting into it. Conversely, expansion of consciousness can be found by heading deep into the roots that a band explores, and journeying to the centre of their inspiration.

Thus, a curious paradox is attained, whereby the traditional elements of an outfit’s sound are superseded by them blasting their core vibrations into unchartered territory. Such is the case with the new opus from third-eye visionaries Hills, a dizzying journey that traverses through the band’s origins and beyond to new dimensions.

The Gothenburg-based Hills are entering their ninth year of existence, in which they’ve released two full-length albums, the second of which, ‘Master Sleeps’ saw a vinyl outing on Rocket last year. Part of a rich scene in their homestead also including friends and Rocket Recordings label mates Goat, they form the new chapter in a tradition of Swedish psychedelia that found its origins in late-’60s and early ‘70s freakouts and mind-melts by the likes of Baby Grandmothers and Älgarnas Trädgård – not to mention the unholy trinity of Pärson Sound, International Harvester and Träd Gräs och Stenar – before being developed by the likes of The Spacious Mind and Dungen in the last two decades.

These inspirations make their mark on ‘Frid’ by journeying inward, via mantric repetition and hip-shaking pulsations as on the ten-minute monolith, ‘ Och Solen Sänkte Sig Röd’, yet they can also lurch into the unknown via the fuzz/wah odysseys of the aptly monikered ‘National Drone’ and the ceremonial exhortations of the closing ‘Death Will Find A Way.’As they also showed recently at a rare and spellbinding appearance at Liverpool International Festival Of Psychedelia, Hills have landed on a rich and intoxicating sound that sidesteps the cliches and humdrum stylistic foibles that often plague modern-day psych, in the process breathing new life into an approach that can sometimes seem in danger of appearing redundant through lack of imagination.

‘Frid’, their most out-of-mind and out-of-sight effort to date, crystallises everything that makes these Scandinavian satyrs stand out from the global herd; adventurous experimentation and fearless hallucinatory intensity, rendered with brass-knuckle fortitude. The end result is 38 minutes that translate into a feast for seasoned crate-diggers and fresh-faced converts alike. There is, indeed, gold in these here Hills.