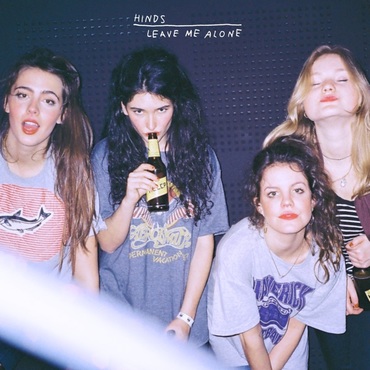 Kicking things off with their single Garden, Hinds take us on a badass rock and roll ride on their debut full-length Leave Me Alone. Weaving sun-kissed, 60’s-inspired melodies, executed with a genius call-and-response between co-vocalists and band co-founders Perrote and Cosials, Hinds create the ultimate soundtrack to the best day ever – from start to finish – spent with your four best friends. In addition to previously released fan favorites including the band’s first-ever single Bamboo, Castigadas En El Granero – which translates in English to ‘Grounded In The Barn’ – and the band’s first new song of 2015 Chili Town, Leave Me Alone only gets better with each song. Featuring bright surf-pop tune San Diego, the mixed-tempo Fat Calmed Kiddos, and a bitter ode to shitty boyfriends in And I Will Send Your Flowers Back, Leave Me Alone is guaranteed to bring the Mediterranean sun to you wherever you are in the world at any time of the year.