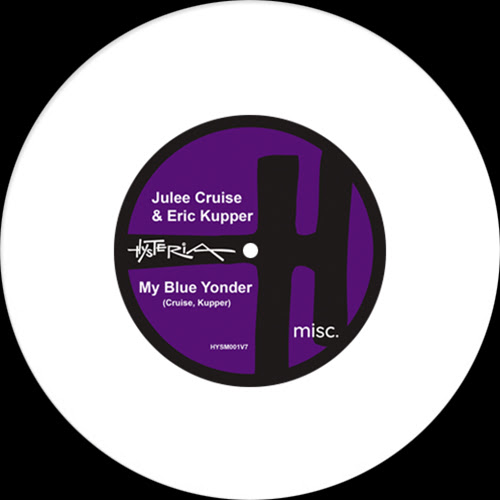 In the mid 90’s, Julee Cruise and Eric Kupper were signed to the same music publisher, Warner Chappell. Patrick Conseil, who signed both, thought it would be a good idea for them to get together and collaborate. He was correct in that assumption, and this has lead to an enduring relationship, both creatively and as friends. These two tracks were originally intended as demos, but somehow got leaked onto YouTube, with positive response. Eric thought it would be a great idea to remaster the demos, keeping the raw edge, and give them a proper release, some 20 plus years later. Julee enthusiastically agreed. Having been influenced by the likes of Roni Size, 4 Hero, Jacob’s Optical Stairway, LTJ Bukem and DJ Die (the latter of whom Eric did a collaboration with), Kupper was experimenting with drum and bass. He could often be spotted in London clubs ‘The End’ and ‘The Globe’ checking out and enjoying the music and the vibes.

‘My Blue Yonder’ is one of the few tracks Kupper has ever written lyrics to. They were inspired by his then toddler daughter, Zoe. One day, Eric found his 3 year old on the floor, wrapped up in a blue blanket, looking blissful. When he asked her what she was doing, she replied ‘I’m in my blue yonder’. She had heard the phrase in a song from a children’s video. Eric then sat down and wrote a moody yet childlike song about a utopia, based on his daughter’s likes and dislikes, her joys and her fears. A compelling blend of orchestral arrangements, frenetic beats, and Julee’s unique vocal approach. Julee has often commented that it is one of her favourite tracks she has ever recorded. This collaboration also led to ‘Satisfied’, with lyrics and melody written by Julee. An ethereal somewhat existential track, with jazzy chords and pulsating arpeggios, it still has Eric’s vibe, within a different music style. Julee’s beautifully phrased vocals and lyrics bring the track to life, giving it a clear vision.