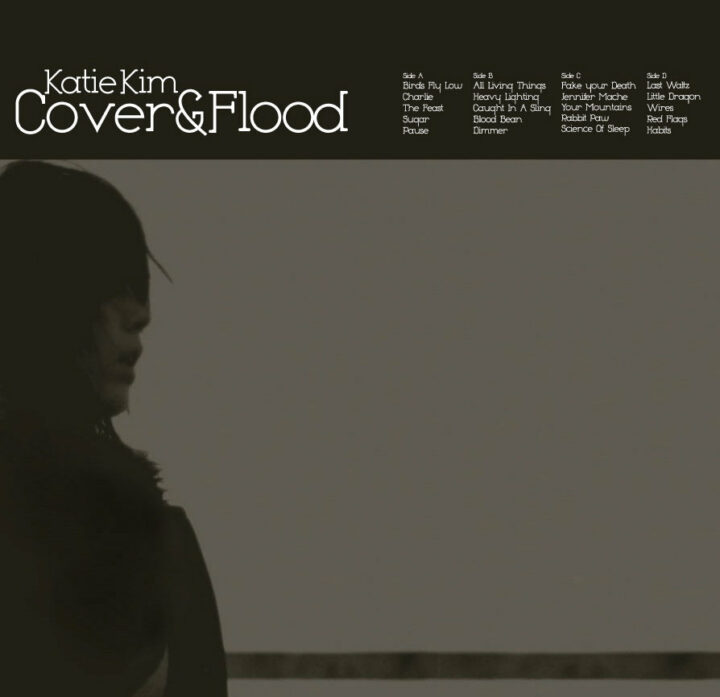 Written, recorded and produced by Katie Kim
Co- produced and recorded with John Haggis in Granny Studios, Waterford and my bedroom. Mastered by Alex Lennon.

“Katie Kim’s second album Cover and Flood is a dark, haunting piece from the fiercely talented Irish songstress. It’s musically situated somewhere between P.J. Harvey’s Let England Shake and Portishead’s Third. It’s right up there with Cathy Davey, Villagers, Lisa Hannigan and other more polished outfits. Yet, that is as far as the comparison goes. Katie Kim’s style is entirely of her own making.Let’s just put this out there, there has yet to be an album this year which in my humble opinion surpasses this work. Katie Kim has created something incredibly rare. It is an album which has authenticity, impact and unquestionable prowess. It really is a privilege to get to listen to this standard of music.”
– COCK&BULLTV

“Let us get to the heart of the matter straight away: Katie Kim’s Cover And Flood is very, very good. Appealingly minimal half-whispered melodies blend with primitive guitar arpeggios, or pianos and cellos, or organs and harmoniums, or drum-machine beatz, or electronic fuzz, and over it all varying degrees of echo, reverb, distortion and background noise wash like a comforting lo-fi sea.”
– HOT PRESS 2012

“Cover And Flood conjures an atmosphere that’s instantly familiar, in much the same way as other innovators The xx and James Blake. Staying in character for the duration, she immerses the listener in her world for 50 minutes, transporting them from the mundaneness of an overcrowded 8.45am train to the dark of a high-ceilinged townhouse in the throes of night, with just a few well places strings and ethereal vocals. Or in the case of the haunting Habits, a plinky-plonky piano that someone’s dead grandmother probably played. It shows the talent is there, but the Waterford lady’s passion is in idea-forming, not in tidying up for any record companies that might be passing through her basement recordings. It indicates that not one sound is there by accident, it’s been pored over. It proves she’s an artist of the purest kind, a visionary.”
– HEINEKEN MUSIC REVIEW – 2011

“Katie Kim is unique in her art form. Her style is sweetly dissonant and hypnotic, created with the use of looped harmonies and effects pedals. She drowns her audience in velvety vocals and haunting melodies that pirouette around thundering guitar arpeggios, tied together with a dreamy gossamer ambience akin to that of Mazzy Star or Beach House.”
– FLIPITTV.COM – 2012

“Waterford songstress Katie Kim offers a glance at her forthcoming sophomore release, Cover and Flood. “Heavy Lighting” is a slowcore waltz at the bottom of the ocean, steeped in gloomy ambience. Like the echo chamber divinity of a Zola Jesus ballad or CocoRosie’s dank naïveté, Irish native Kim writes a soft dirge. Heavy with bare gossamer isolation, the track eventually rises to the elegant, murky cloud of its conclusion, a total-bummer canticle reminiscent of Long Division-era Low or DM Stith’s “Braid of Voices.”
– GARBAGE DAYS – 2011

“Katie Kim, also known as Katie Sullivan, is a singer-songwriter act out of Dublin. I quickly fell in love with the double album Cover and Flood: 20 songs of wistful sounds from the Irish songstress. There are lovely melodies throughout, and a downhearted sound to her music which only make her compositions sound all the more emotive. She’s got some really fragile, delicate sounding vocals not unlike that of Warpaint’s Jenny Lee Lindberg that just lures you in. Before you know it, you’ve listened to the same song over and over”
HEARD INSTINCT – 2011

“Gorgeous material from Katie Kim. I can definitely hear Linda Perhacs piano/cello influence in “Pause” which perfectly compliments her fragile voice and melodies. Any fans of early Warpaint/White Hinterland are going to love this.”
DIPPED IN DOLLARS – 2011