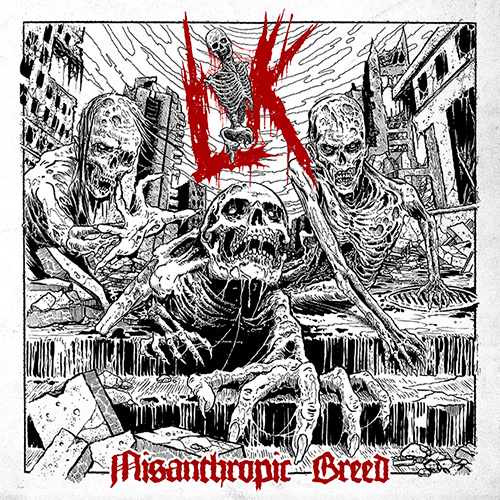 Stockholm-based Lik (the Swedish word for “corpse), release with ‘Misanthropic Breed’ their third album, a longplayer with a title that’s very relevant these days in various ways.

Lik was founded in 2014, with a debut album that alighted from the moistly soil of Stockholm in 2015. ‘Misanthropic Breed’ follows ‘Carnage’ from 2018 and marks a next step of a band that evolves with each album released.

There s not a lot of time to find your way into the album. ‘The Weird’ begins with a short splatter sequence, being a kind of intro, before a massive Death Metal attack sets the tone of voice in a stellar fashion. ‘Misanthropic Breed’ is a mighty Death Metal album with songs, being fierce and brutal. Tracks like the slower paced ‘Female Fatal to the Flesh’ and the thundering ‘Morbid Fascination’ are for sure great Death Metal blasts. It’s an oldschool vibe that comes with each of the eleven songs, tunes that doesn’t provide any pause or a break and also the two tracks that finish off the album aren’t fillers. ‘Faces of Death’ comes with a very sinister sonic grin, handing over to ‘Becoming’, the massive finisher at the end.