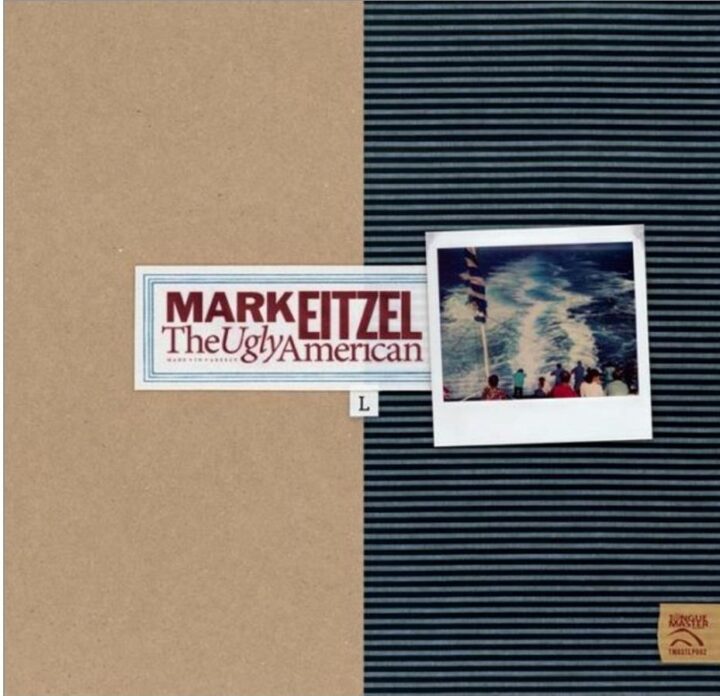 Mastered for vinyl at Abbey Road. Mark Eitzel’s The Ugly American now Available on vinyl for the first time. A lull after the electronically ambient album The Invisible Man (2001) Eitzel’s recording output was followed by two releases: a covers album Music For Courage And Confidence (2002) and an album of solo and American music Club songs re-interpretations The Ugly American (2003) performed by a band with traditional Greek musicians. The Ugly American was originally mooted as an EP after an invitation to Athens, Greece to reinterpret certain songs under the guidance of respected local musician Manolis Famellos. The trip to Athens (Greece) materialized in November 2001 and a full-blown 10 track album was agreed. The subsequent album was recorded and released in 2003 on cd only. Seventeen years later, with a rejigged artwork and an Abbey Road cut, The Ugly American is unveiled for the first time on vinyl.

The ten tracks cover a varied period of Eitzel’s solo output, the cult band American Music Club albums, and a sole composition from Manolis Famellos (Love’s Humming). All songs were recorded with the addition of traditional Greek instruments (bouzouki, tzouras, Cretan lyra and zournas) under the guidance of Manolis Famellos and his band. At a time were American music Club albums where hard to obtain re-interpretations of Western Sky, Last Harbour and Jenny were treated with effervescence and stunning new arrangements. Anything (originally on The Invisible Man) as a stark and bleak electronica track, is now heightened to a majestic instrumentation opus. The album retains the heartfelt tales of sadness that you would expect from self-deprecating Mark Eitzel in a Folk and pastoral context. Before the album was even recorded, the trip to Greece was deemed in certain quarters as controversial, an ‘unnecessary excursion’ with cries of ‘sacrilege’ buoyed on by a skewered conception of Greek music, thus expecting a ‘freak novelty’. Today this beautiful recording is revered for its haunting arrangements and Eitzel’s deep warm and rich vocal delivery.