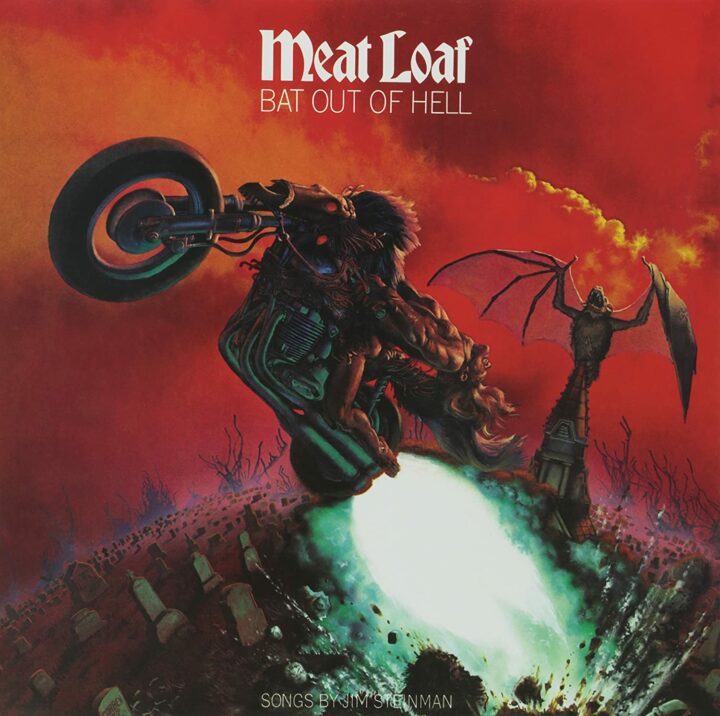 MEAT LOAF – Bat Out Of Hell

There is no other album like Bat Out of Hell, unless you want to count the sequel. This is Grand Guignol pop – epic, gothic, operatic, and silly, and it’s appealing because of all of this. Jim Steinman was a composer without peer, simply because nobody else wanted to make mini-epics like this. And there never could have been a singer more suited for his compositions than Meat Loaf, a singer partial to bombast, albeit shaded bombast. The compositions are staggeringly ridiculous, yet Meat Loaf finds the emotional core in each song, bringing true heartbreak to Two out of Three Ain’t Bad and sly humour to Paradise by the Dashboard Light. There’s no discounting the production of Todd Rundgren, either, who gives Steinman’s self-styled grandiosity a production that’s staggeringly big but never overwhelming and always alluring. While the sentiments are deliberately adolescent and filled with jokes and exaggerated clichés, there’s real (albeit silly) wit behind these compositions, not just in the lyrics but in the music, which is a savvy blend of oldies pastiche, show tunes, prog rock, Springsteen-esque narratives, and blistering hard rock (thereby sounding a bit like an extension of Rocky Horror Picture Show, which brought Meat Loaf to the national stage). It may be easy to dismiss this as ridiculous, but there’s real style and craft here and its kitsch is intentional. It may elevate adolescent passion to operatic dimensions, and that’s certainly silly, but it’s hard not to marvel at the skill behind this grandly silly, irresistible album.