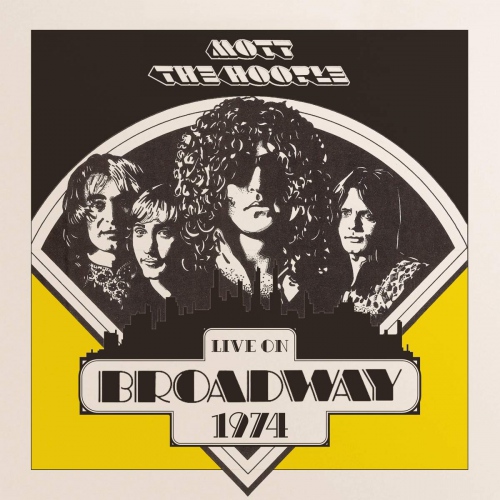 Live on Broadway 1974 is the original recorded in-concert finale from Mott the Hoople. Touring the USA to promote their new hit records The Golden Age of Rock N Roll and The Hoople and parading the classics All the Young Dudes, All the Way from Memphis and Roll Away the Stone the group was soaring.

In May 74, Mott the Hoople became the first rock band to sell out a week of concerts in New Yorks theatreland, when they stormed The Uris on Broadway. Recorded for live audio, but sadly not captured on film, five Broadway songs would be edited and merged with Motts 1973 Hammersmith Odeon tapes to create a truncated LP Mott the Hoople Live their last CBS album release.

Journalist Ben Edmonds enthusiastically described Motts shows at The Uris, where, the ghost of Broadway tradition exchanged its top hat and tails for a pair of shades and a week-long electric seizure. The Brits rocking residency created several spectacular U.S. headlines including: HOOPLA HITS BROADWAY (Record World), Rock Invades the Great White Way (Performance), What Rock n Roll is all About (Scene) and Hoople Whoop De Do on Broadway (Circus). The New York Times wrote: Mott the Hoople arrived on Broadway Tuesday night for the first of six shows, the first hard rock group ever to appear there, and the Uris Theatre will probably never be the same again. Apart from the cigarette burns in the rugs and spilled drinks stains on the floor, the overwhelming volume of the music must somehow stick in the theatres walls, deafening mere unamplified speech and song forever.