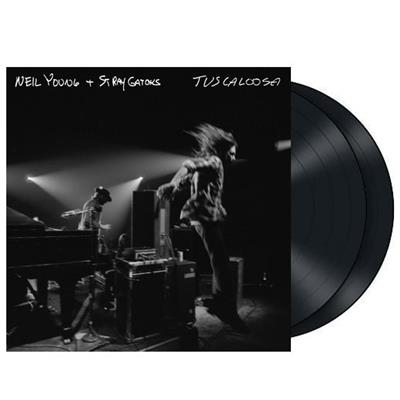 All orders will be shipped on or before Friday June 7th

The previously unreleased, 11-track recording features Neil Young with The Stray Gators recorded live at the University of Alabama, Tuscaloosa on February 5th,1973.

During 1971 – 1973, between solo shows and dates with Crazy Horse, Young would switch up his sound to suit the material he would focus on when touring with The Stray Gators.

Comprised of Tim Drummond (bass), Kenny Buttrey (drums), Jack Nitzsche (piano) and Ben Keith (steel guitar) this lineup, most notably, would go onto record Harvest and Times Fades Away. Tuscaloosa features live versions of songs from Young’s self-titled 1969 debut (“Here We Are In The Years”) plus classic songs from his two most commercially successful album of his early career, After The Goldrush (1970) and Harvest (1972).

The album also contains a stunning version of the title track from the live album Time Fades Away that would not surface until later in 1973, as well as songs from the seminal classic Tonight’s The Night that would eventually be released in 1975.

Tuscaloosa was produced by Neil Young, Elliot Mazer and mixed by John Hanlon and mastered by Chris Bellman at Bernie Grundman from the original analogue tapes. The resultant audio sounds as immediate and present as it did the moment it was performed as you hear it. The sonic quality of these tracks is nothing short of astonishing making this document an essential part of any Neil Young collection. Photographs by Joel Bernstein complete the packaging.