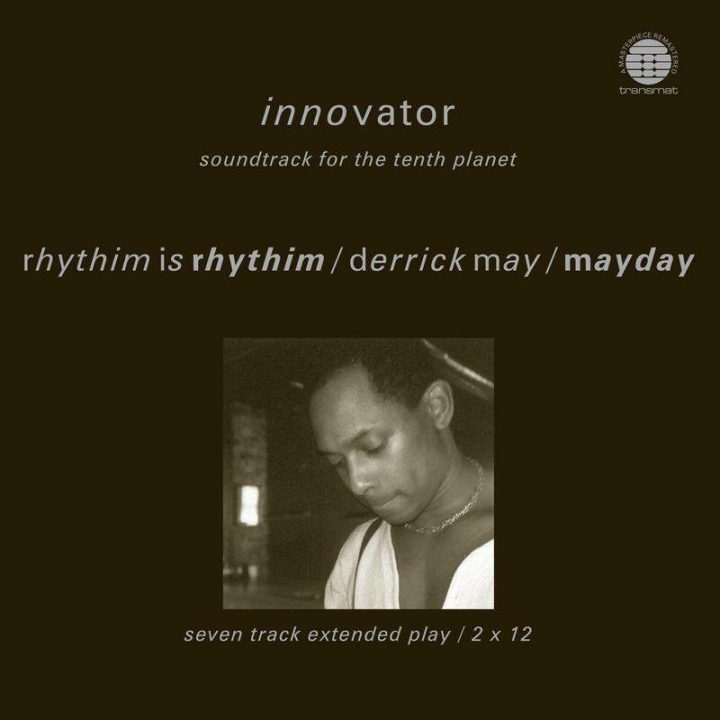 When Network Records originally issued Innovator in 1991 we knew that the music contained within was timeless. At that time, of course, we had no grasp of how well Derrick’s epic soundscapes would time travel. We christened the collection – Soundtrack For The Tenth Planet – because it seemed like the music (and Derrick) had indeed arrived from another world.

The release has been acclaimed as iconic because Derrick, the madcap and maverick philosopher of Detroit Techno, introduced the concept of dance music with a musical and emotional agenda way beyond anything that had come before. Beats with beauty. Literally the strings of life. Where fellow musical geniuses Chic had previously urged everybody to simply Dance, Dance, Dance mood alchemist Mayday merged simple yet cerebral dreamscapes with strange and urgent complex dance rhythms and invited us all to Dance And Dream. And in a strange juxtaposed way helped birth the hedonistic Acid House scene with classics Nude Photo and Strings Of Life.

The energy is frenetic, but merged with a new age ambience. The gems collected on this offering were iconic in 1991, now they cause mass hysteria when Derrick turns his one time musical experiments, created in a tiny room in Detroit, and turns them into epic concerts with orchestras and musicians across the globe. Hand In Hand existed in 1991 and we wanted to release it then, but it’s taken until now for the complete 13 minute recording to finally meet the world. It will be revered, because like all of Derrick May’s music it is life affirming. Emotions Electric indeed.

The original Innovator release was housed on one single slab of wax. This time around it’s expanded it to two discs to make space for Hand Over Hand and also so everything elsewhere – masterpieces remastered – can be presented in a complete and superior fashion. Whatever the tweaks, changes and updates etc all these years on, this music still sounds gloriously alien and groundbreaking. But there’s still no Tenth Planet.

TRACKLISTING:
A1. The Dance
A2. Strings Of Life
B1. Beyond The Dance
B2. Sinister
C1. Wiggin
C2. Nude Photo
D. Hand Over hand