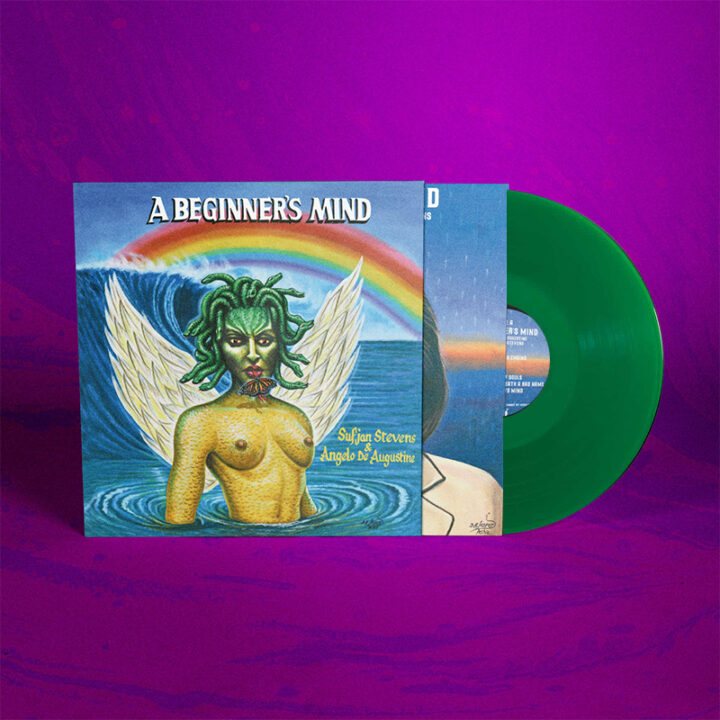 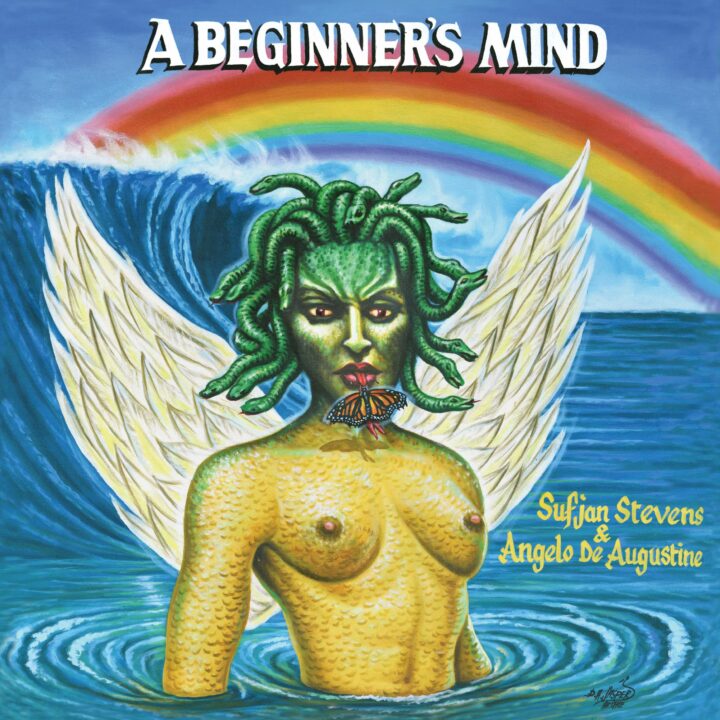 Sufjan Stevens and Angelo De Augustine will release a collaborative album, A Beginner’s Mind, September 24 on Asthmatic Kitty Records. Two songs from the album, “Reach Out” and “Olympus,” debut today along with a video for “Reach Out” shot earlier this year by Sufjan and Angelo on VHS-C cameras from their respective coasts, New York and California, starring their beloved dogs Joku (a Jindo) and Charlie (a Havanese) and edited by Jess Calleiro.

A Beginner’s Mind began when the two musicians and Asthmatic Kitty labelmates decamped to a friend’s cabin in upstate New York for a monthlong songwriting sabbatical. Watching a movie to unwind after each day’s work, they soon found their songs reflecting the films and began investigating this connection in earnest.

The resulting album is 14 songs (loosely) based on (mostly) popular films—highbrow, lowbrow and everything in between. They wrote in tandem—one person writing a verse, the other a chorus, churning out chord progressions and lyrics willy-nilly, often finishing each other’s sentences in the process. Rigorous editing and rewriting ensued. The results are less a “cinematic exegesis” and more a “rambling philosophical inquiry” that allows the songs to free-associate at will. Plot-points, scene summaries, and leading characters are often displaced by esoteric interpolations that ask the bigger question: what does it mean to be human in a broken world?

Stevens and De Augustine wrote everything with a deliberate sense of shoshin—the Zen Buddhist concept for which the record is named and an idea that empowered the pair to look for and write about unlikely inspiration without preconceived notions of what a film had to say (The I-Ching and Brian Eno’s Oblique Strategies also served as incentives along the way). The movies became rhetorical prompts, with the songwriters letting their distinct reactions and creative instincts govern their process. The underlying objective was empathy and openness, absent of judgment: to observe with the eyes of a child.

The album’s artwork comes courtesy of Ghanaian artist Daniel Anum Jasper. In Ghana during the late ’80s, a novel “mobile cinema” culture emerged when enterprising film fans screened Hollywood blockbusters in the backs of pick-up trucks using portable generators. To advertise the movies, artists painted alternate posters inspired only by the scant information they had about each film. Sufjan and Angelo commissioned a pioneer of this form—Jasper—to paint a series of new works for A Beginner’s Mind (including covers for three 7-inch singles). Information about the project was deliberately kept vague so that Mr. Jasper could work without restraint.

Sufjan Stevens is an artist, songwriter and composer living in New York. He has released nine widely lauded studio albums and a number of collaborations with fellow musicians, choreographers and visual artists from the New York City Ballet and the celebrated director Luca Guadagnino to his stepfather Lowell Brams and noted dancer Jalaiah Harmon.

Angelo De Augustine is an artist and songwriter living in Thousand Oaks, California—a suburb north of Los Angeles, where he grew up. He has released three albums including his self-released debut, Spirals of Silence (2014), and two for Asthmatic Kitty Records, Swim Inside The Moon (2017) and Tomb (2019).

*Green colour in image is for mock up purposes only and may differ to actual colour.