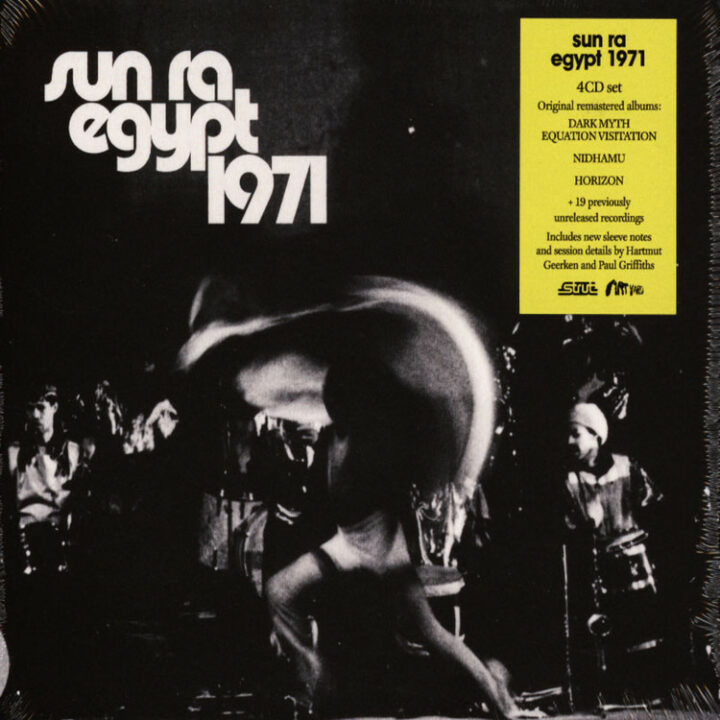 In the years leading up to 1971, Sun Ra wrote many compositions and poems specifically inspired by the ancient African kingdoms and many others with associated mythological and heliocentric connotations. as such, a visit to Egypt and the opportunity for the Arkestra to play there was a matter of necessity. Ra’s first ever concerts outside of the U.S. had occurred in late summer and autumn of 1970 with performances in France, Germany and the UK and a second European tour was arranged for late 1971. at the end of that second tour, Ra caught wind of cheap flights from Denmark to Cairo.

This release comprises recordings made by Arkestra member Thomas “Bugs” Hunter made in December 1971 in the streets around the Mena House Hotel, Giza, from a concert held at the House of Goethe institute ex-pat Hartmut Geerken in Heliopolis, from a live Cairo TV channel broadcast and a concert at the ballon theatre in Cairo. The impact and significance of these few weeks upon Sun Ra can be measured by the growth and development of his output over the next few years; the immediate post-Egypt period included new studio and live recordings on the Saturn, Blue Thumb, Atlantic and Impulse labels and the ‘Space Is The Place’ movie.

The 4cd set features the three albums from the ‘Live in Egypt’ series: ‘Dark Myth Equation Visitation’, ‘Nidhamu’ and ‘Horizon’ alongside previously unreleased material from the december 1971 recordings. All tracks are remastered from the original tapes and the cd set also features a 24-page booklet featuring new sleeve notes and rare photos by Hartmut Geerken and background information on the recordings by Paul Griffiths.