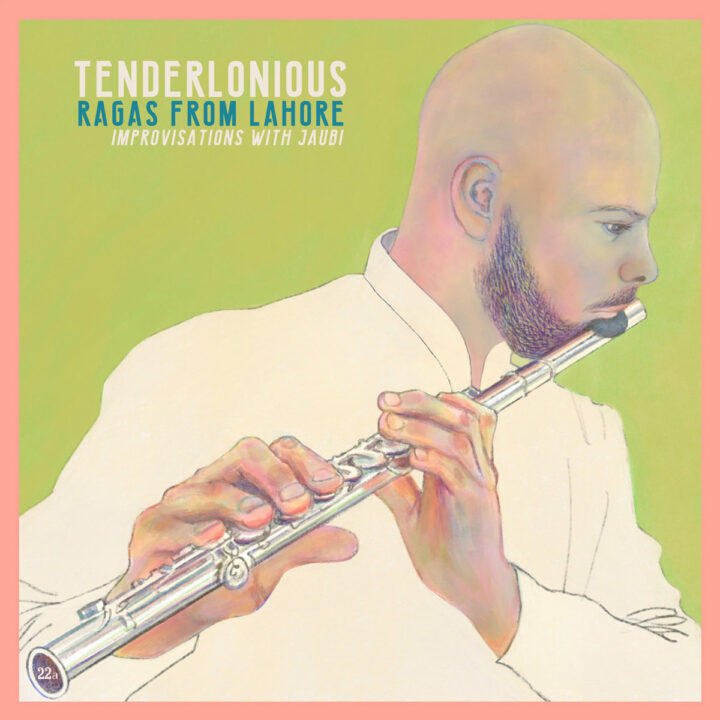 In April 2019, 22a boss and multi-instrumentalist, Tenderlonious embarked on a trip to Pakistan to work with Lahore based instrumental quartet, Jaubi. Following on from the success of the three-track limited edition 10″ vinyl release of Tender in Lahore earlier this year, 22a presents the full LP-length suite of improvised Ragas from a one day recording session in Lahore, featuring four previously unreleased tracks.

Opening track Shalah Bagh is inspired by the Mughal gardens in Lahore they visited. It is a fully improvised track guided by Kashif Ali Dhani on tabla and vocals, with Tenderlonious on soprano saxophone. Raga Chandrakauns acts as the basic framework, evolving into a free conversation between tabla and saxophone. Azadi is the Urdu word for freedom and is a pure raga composed in the beautiful and devotional pentatonic Raga Bairagi, also based in the 12-beat rhythmic cycle (Ektaal). Like everything during these sessions, this raga was shown to Tender moments before the one take recording and what ensued was an improvised conversation between the musicians. Featuring Jaubi members Zohaib Hassan Khan on sarangi – Zohaib is a 7th generation sarangi maestro and one of only 5 professional sarangi players left in Pakistan practicing this ancient art form. Plus Jaubi guitarist and band leader Ali Riaz Baqar, providing the guitar accompaniment. Other tracks include ‘Kirwani Part II’ is an alternate take of the original, this time featuring Tenderlonious on soprano saxophone in conversation with Kashif Ali Dhani on tabla. Marek Pedziwiatr, from EABS and Astigmatic Records, provides the synth drone back drop on all tracks.

Be the first to review “TENDERLONIOUS – Rags From Lahore: Improvisations with Jaubi – LP – Vinyl” Cancel reply