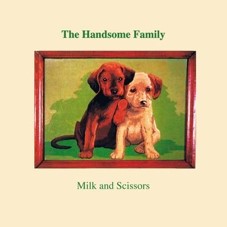 Milk and Scissors is the second album released by The Handsome Family. It was originally released in 1996 by Carrot Top Records, and by Scout Releases in the same year.

On Milk and Scissors, the Handsome Family began their retreat away from the electric guitar-based sound of their debut, Odessa, and started to ease into their unique mix of Appalachian textures and 20th century despair that would become their calling card.