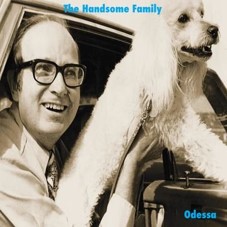 Reissue of Odessa – the first album by The Handsome Family originally released in 1994 by Carrot Top Records.

The Handsome Family’s first album certainly stands apart from their later work; at this point, the group still had a live drummer, they were playing more rock-oriented material (the noisy guitars on Here’s Hopin’ and One Way Up would have sounded rather out of place on Through the Trees), and there’s a bit more upfront humour than in their later work. The key phrase, however, is “a bit”; the creepy but amusing Freudianisms of Pony, the drunkard’s hymn of Water Into Wine, and the morning-after lament of She Awoke With a Jerk are witty enough, but there’s a dark undertow that wavers between cynicism and hopelessness which allows these songs to sit side by side with the album’s takes of murder (Arlene), urban alienation (Moving Furniture Around), and corrupted faith (Everything That Rises Must Converge). Brett Sparks’ plain but resonant Midwestern twang gives the songs on Odessa the ring of common truth, and he and Rennie Sparks had already established themselves as writers to be reckoned with, conjuring a lyrical voice that sounds homey and terribly alienated at the same time.