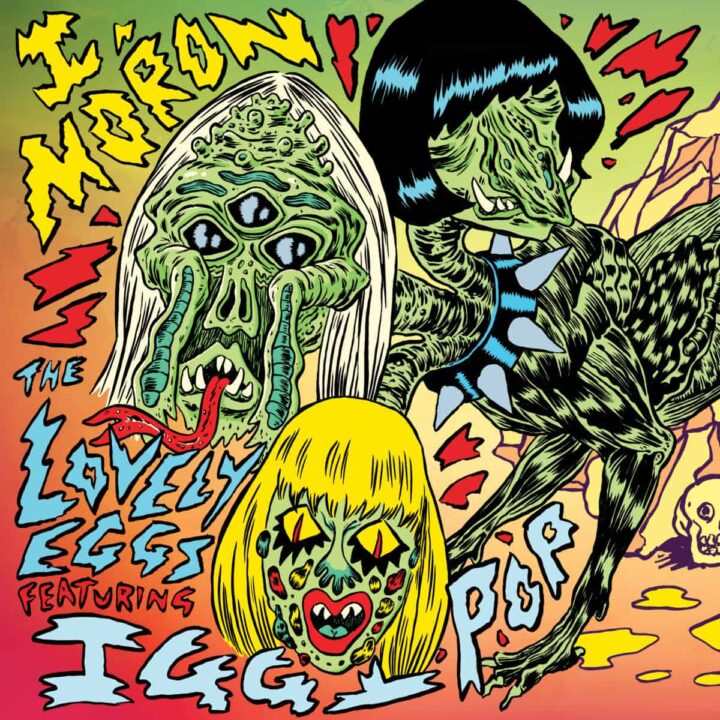 The collaboration will be released on ltd edition yellow 7” vinyl with eye watering art-work by illustrator Casey Raymond. Backed by a B Side cover of Iggy Pop’s “Dum Dum Boys” from his 1977 album ‘The Idiot’ and limited to 1200 copies this is one not to be missed!

“Being in The Lovely Eggs we’re kind of used to surreal experiences but collaborating with Iggy Pop takes the biscuit,” exclaims singer/guitarist Holly Ross. “It’s actually unbelievable. For him just to say nothing but “moron” over and over again fitted in with the sentiment of the song perfectly. He just GOT it. We are all morons. In a world of moronic things. In a world of moronic ideas. You are moron. I am Moron. We are Moron.”

The single follows on from the band’s Number One Independent Selling Album “I am Moron” released in 2020. ‘I am Moron’ was declared “Album of the Day” by BBC 6 Music and received critical acclaim from the national press:

The Sunday Times called it “A Triumph”

★★★★ “I am Moron is much cleverer than it would have you believe”
– The Telegraph,

“An act of fine calibration of noise and sweetness” – Q,

“Packed with their observations of modern culture and the utter madness of the current world” – Sunday Mirror,

Album of the month – Classic Rock,