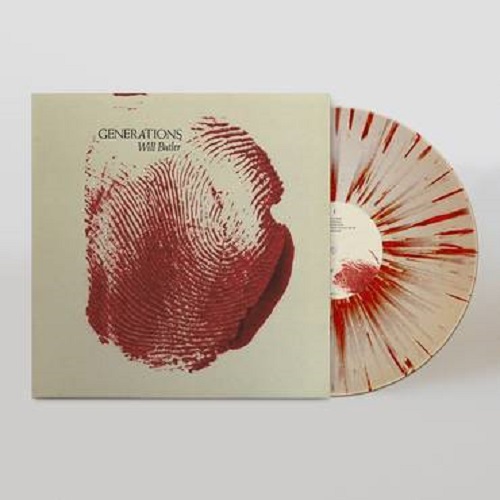 He also found the time and inspiration to write and record a new album, Generations. “My first record, Policy, was a book of short stories,” Butler says. “Generations is more of a novel despairing, funny, a little bit epic… A big chunk of this record is asking: What’s my place in American history? What’s my place in America’s present? Both in general as a participant, as we all are, in the shit that’s going down but, also extremely particularly: me as Will Butler, rich person, white person, Mormon, Yankee, parent, musician of some sort, I guess. What do I do? What can I do? The record asks that question over and over, even if it’s not much for answers.”

While the songs on Generations contain their fair share of dread and regret, there is ultimately a lightness that shines through Butler’s music. That brightness is at its most intense when he and his solo band Miles Francis, Sara Dobbs, and Julie and Jenny Shore perform on stage. Their electricity is palpable throughout Generations, with the bulk of the new songs having been worked out live. Wild synth production gnarly bass synths with live drums and anthemic backing vocals as on first single Surrender are punctuated by intimate, direct moments: Butler’s voice cracking on Fine as he conjures his ancestors, and Promised, a meditation on friendship, how lives are built together, and how and why they drift apart.

Generations was recorded and produced by Butler in the basement of his home in Brooklyn. Tracking finished in March 2020, as New York closed down for the pandemic. Half the record was mixed in Montreal by longtime Arcade Fire engineer Mark Lawson, the other half by Brooklyn-based producer Shiftee (who is, incidentally, bandmate Julie Shore’s husband and Will’s brother-in-law). Generations opens a dialogue with the world. It posits answers and deals with those answers being refuted. Ultimately, it navigates the conversation as a way to find the truth… or at least a way forward.

SIDE A Outta Here, Bethlehem, Close My Eyes, I
Don’t Know What I Don’t, Know, Surrender..

SIDE B Hide It Away, Hard Times, Promised, Not Gonna Die, Fine